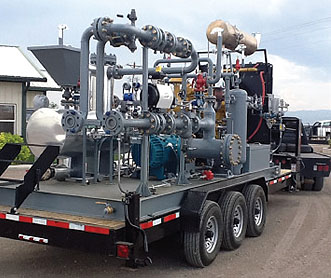 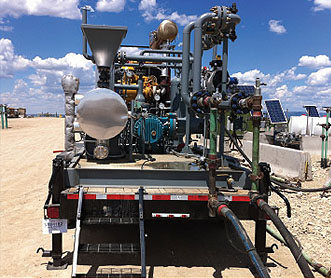 Typical gas wells produce not only natural gas but also liquids such as water and hydrocarbons like propane and butane. Except in wells where the gas is dominantly dry, condensate can build up down-hole, reducing the gas flow to an extent where the well is shut in and cannot buck the line pressure of the export flow line.

The conventional method for mitigating this down-hole liquid restriction is to disconnect the well from the pipeline and then free flow the well into a portable tank until the gas begins to free flow again. The pressure in the tanks is usually controlled by venting directly to the atmosphere releasing VOCs and creating environmental hazards. The liquids trapped in the tank require removal, typically by truck. This increases heavy traffic, often in sensitive areas, and significantly impacts production costs.

This conventional blow down method, increasingly under attack, is costly to execute and leads to potentially dangerous work environments. Other possible solutions, such as soap sticks, plunger lifts, pump jacks and ESPs are not always effective with gas and expensive to install and maintain.

The simple solution is a Leistritz Multiphase Blow Down Unit (MBDU). This portable, self-contained unit simultaneously evacuates both the liquids and gases trapped in the annulus and production tubing and boosts the well pressure allowing the gas and trapped liquids to flow with the existing pipeline. This eliminates the need to vent or flare gas, transport hydrocarbons over public roadways and most importantly allows the operator to capture all the valuable gas and condensate in their existing pipeline network.

A typical blow down cycle starts by connecting the MBDU in by-pass mode to the well export pipeline. The MBDU starts pumping against full pipeline back pressure with well shut-in pressure at the inlet. After a short period of time the MBDU builds differential pressure by drawing down the wellhead pressure. The gas starts flowing through the MBDU which increases the tubing velocity, dragging along the trapped amounts of liquid, eventually restoring the well to the desired flow and pressure conditions. Once the original conditions are restored, the MBDU is disconnected from the well and can be transported to another well site to repeat the same procedure. 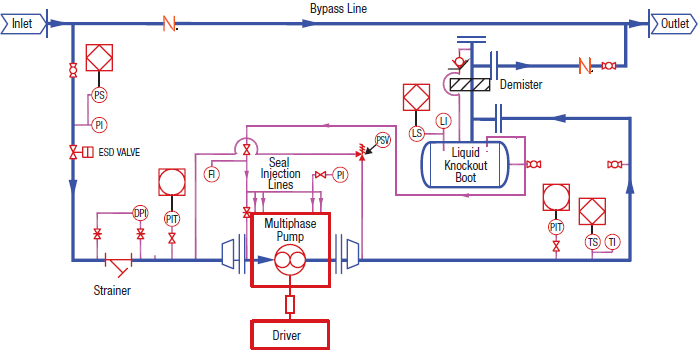